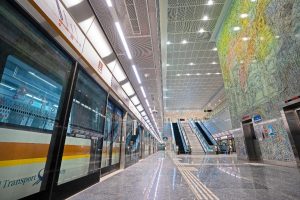 Singapore’s Land Transport Authority held a ceremony on August 27, 2021, for the opening of the second phase of Thomson-East Coast Line Stage 2 (TEL2).

The TEL2 has a length of 13 km served by 6 stations, with the new Caldecott station being an interchange with the Circle Line (CCL) providing passengers more connections in the north area.

The commuters will also enjoy shorter journeys with TEL2. For example, a resident from Sin Ming, in the town of Bishan, in the Upper Thomson, travelling to Republic Polytechnic (in Woodlands) will have his journey time halved, from the current 50 minutes via bus, to 25 minutes by TEL train. Similarly, a resident staying in the Mayflower commercial district will be able to get to Jurong East in 40 minutes by train, as compared to 60 minutes via bus and train today.

The TEL2 is designed with multiple station entrances for the convenience of the commuters, and it also incorporates inclusive features such as high colour contrast signages and lift buttons, lighting along handrails of staircases, as well as platform seats with backrest and arm support, to cater to seniors and visually-impaired commuters.

LTA hopes that with the increased rail connectivity, motorists will try out the new TEL2 and experience the convenience of travelling by public transport more regularly.

The Thomson-East Coast Line will be 43 km-long with 32 stations eight of which are interchange stations. The new MRT line will be opened in several stages, with the first one being operational from January 2020.

It is the sixth MRT line in Singapore and when fully operational, the new line is expected to serve approximately 500,000 commuters daily in the initial years and increasing to about 1 million commuters in the longer term.

Residents living along the TEL corridor will have a faster and more direct option to travel towards the city centre via the train.