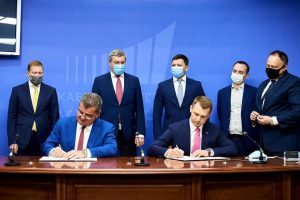 The Ukraine Railways, Ukrzaliznytsia, and Stadler CIS AG signed an agreement to localise the train manufacturing to develop the rail passenger transport as well the rail supply industry.

Under the cooperation framework, if Stadler wins one of the tenders and receives an order to supply the rolling stock for the City Express project, the Swiss manufacturer will consider the possibility to localize the train production in Ukraine.

“We are interested to collaborate with the world train manufacturers which are willing to bring their know-how and manufacturing process in the country. Stadler is a potential partner, which supplied rolling stock for the Belarusian railway. Out main condition is to localise the train manufacturing process in Ukraine. This will also attract new investments, will develop the economy and our heavy industry sector,” Ivan Yuryk, the Acting CEO of Ukraine Railways said at the signing ceremony.

Stadler’s trains can be used for the suburban and regional rail services in Ukraine, particularly on the City Express.

The Swiss manufacturer will be able to use the Kyiv Electrical Carriage-Repair Plant, part of Ukrzaliznytsia. In February, the technicians from Stadler visited some train repair and maintenance facilities in Ukraine and the one in Kyiv is the optimal location to manufacture the trains because its main profile is the modernisation of the suburban trains.

The two companies will work together to modernise the rail passenger transport and to attract funding.

The Memorandum of Understanding was signed by the Acting Chairman of the Board of Ukrzaliznytsia, Ivan Yuryk, the CEO of Passenger Company at Ukrainian Railways, Oleksandr Pertsovskyi, the President of the Board of Directors of Stadler, Peter Spuhler and the Executive Director of Stadler Rail CIS, Alexander Luft.

The agreement was signed in the presence of the Minister for Strategic Industries of Ukraine, Oleh Uruskyy, and the First Deputy Minister of Infrastructure of Ukraine Dmytro Abramovich.

“This year, the Ukrainian rail industry received a maximum budgetary support for the renewal and modernisation of the passenger trains and the railway infrastructure. It is also important to ensure the maximum level of production localisation which will create additional jobs and boost our economy. I welcome the beginning of cooperation between Ukrzaliznytsia and Stadler,” Dmytro Abramovich said.