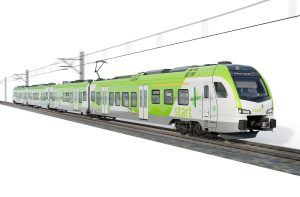 Stadler and the Regionalverkehre Start Deutschland, a 100% subsidiary of DB Regio AG, signed a contract for the supply of 20 Flirt trains which will operate the Maas-Wupper-Express network.

This was based on a commission sent to the Regionalverkehre Start Deutschland GmbH – aka start – by the Traffic Association Rhein-Ruhr AöR (VRR) and the Local Traffic Association Westfalen-Lippe (NWL). This railway traffic company, which was founded in 2016, ordered new vehicles for the first time in this delivery contract.

The new Flirt trains will provide cross-border traffic between Rhine-Ruhr region, Germany, and the Netherlands and from 2026 will enter operation in 2026 on a direct route between Hamm and Eindhoven. The vehicles can be used without restriction in both countries because they are equipped for both the German and also the Dutch traction supply systems and are also equipped with the European train control system ETCS, the German PZB system and the Dutch ATB system.

The extra-long cars of the Flirt vehicles for the Maas-Wupper-Express have 7 doors on each side to ensure easy and safe entry and exit, as well as fast passenger change times.

In four-car version, the train will have a capacity of 375 passengers 235 of which on seats. There are 34 seats spaced further apart in the 1st class.

The fully air-conditioned Flirt trains has passenger WLAN, light and airy passenger compartments and large multi-purpose areas that can accommodate up to 12 bicycles, wheelchairs or prams.

The regional rail operator held a European public tender and the selection of Stadler was based on its “price-performance ratio in combination with the excellent energy values of the vehicles,” Alexander Falkenmeier, managing director of start explained.

In January 2022, start was awarded the contract to operate the Maas-Wupper-Express (RE13) from 2026. The rail system in North Rhine-Westphalia connects Hamm (in Westphalia) and Venlo border town in southeastern Netherlands.

Since 2018 until 2027 the operator provides transport services on sthe 115-km RE5 regional express line connecting Cuxhaven and Hamburg via 13 stations.