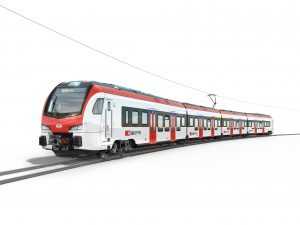 The Swiss Federal Railways (SBB), in association its subsidiaries Thurbo and RegionAlps, awarded Stadler a framework agreement for the supply of up to 510 single-decker Flirt EMUs. The initial call-off order placed by the three companies covers the delivery of 286 vehicles, representing an order volume of around CHF 2 billion (EUR 1.86 billion). The contract is to be concluded after the 20-day objection period has expired.

The contract includes three options that, together with the first order will bring the total fleet to 510 EMUs which will replace the entire train fleet within nine years. The first new trains are expected to enter operation from December 2025 and will gradually replace the existing fleet by 2034.

This is “the largest train tender in Swiss rail history”, Stadler says.

The electric trains will be manufactured entirely in Bussnang, with a share of around 75 per cent of value added for Switzerland.

The two-stage tender procedure was launched in May 2020 and in September SBB shortlisted Alstom, Siemens and Stadler to prepare a tender and all the three companies submitted a tender at the end of April 2021.

Following the evaluation Stadler’s offer was considered good on both cost and quality and the contract was awarded to the Swiss manufacturer.

The tender called for the delivery of 194 EMUs estimated at CHF 1.5 billion (EUR 1.4 billion) with options for the supply of a total fleet of 316 trains, together with the provision of the maintenance services. But the increase of the call-off order for 286 vehicles was made after the railway companies had determined the definitive area of operation for the trains in concert with the Confederation and the Cantons. SBB says that ‘this higher volume of procurement is the only way to replace all the trains that are due to be taken out of operation upon reaching the end of their life cycle.’

“By taking a joint approach to procurement and purchasing a homogenous fleet, SBB, Thurbo and RegionAlps are simplifying rail operations and making a significant contribution to ensuring public transport is competitive and attractive for railway customers,” SBB says.

The single-decker Flirt EMUs will offer more storage space for bikes, pushchairs, and large items of luggage than the vehicles currently in use. They will also ensure good mobile phone coverage and data reception and will be equipped with power sockets in every compartment. The trains will meet the requirements of passengers with mobility disabilities and will provide two spaces for wheelchair-users as well as a wheelchair-accessible toilet. Wheelchair spaces will be available in 1st class for the first time.

Thanks to better motorisation, the new multiple units will also make a significant contribution to improving punctuality. The trains are to be authorised to operate in Switzerland, Germany, and Austria.