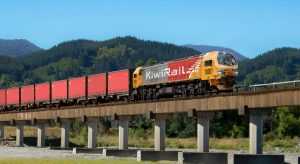 KiwiRail and Stadler Rail Valencia have signed a EUR 228 million framework contract for the supply of 57 new diesel mainline locomotives. The locomotives, which will be made in Spain, will begin arriving and enter service in New Zealand between early 2024 and 2026.

Stadler will supply a latest state of the art Co-Co monocoque locomotive, narrow gauge, customised to KiwiRail requirements and specific operational schemes, incorporating well service proven components and systems. The new locomotives will be used for freight and passenger rail transport predominately on the South Island.

“These are the latest-generation locomotives, which will set up KiwiRail’s South Island freight business for many decades ahead. For rail to play its proper role in New Zealand’s freight system, we need our services to be on time, every time,” KiwiRail Group Chief Executive Greg Miller said.

The locomotives will be compliant with the latest European emission standard (Stage V) resulting in a 25% reduction of nitrogen oxides and a 30% reduction in particulate emissions, as well as a low fuel consumption. Each locomotive will be significantly more powerful and efficient compared to the existing fleet which will allow a CO2 emission reduction of 20-25 per cent through reduced fuel burn and use of onboard technologies. A driver energy reduction and advisory system will support the locomotive and drivers to achieve its optimal energy performance.

“This is a quality product which will help KiwiRail to provide a safe, sustainable and reliable service to Kiwi businesses well into the future,” Rail and Maritime Transport Union General Secretary Wayne Butson said.

The two-cab, narrow body locomotives will be equipped with a diesel engine providing an installed diesel power of 3000 kW, that will in many cases allow KiwiRail to operate its trains with less locomotives than in the current services.

Each of the two cabs will be designed in close cooperation with KiwiRail and according to the latest European standards aiming to achieve an ergonomic, comfortable and safe working environment for KiwiRail’s engineers.

The diesel mainline locomotives will be equipped with diagnostics systems providing real-time information and also enabling KiwiRail to predict when faults could potentially occur. They will also be fitted with an auto engine start stop (AESS) system which can switch off the engine when the locomotive is idling, saving fuel consumption.

KiwiRail owns a 65-locomotive fleet for South Island which has an average age of 47 years and they have been used for 17 years, beyond their economic life. “Some of our machines have had three complete rebuilds over their lives, at significant expense. And we’ve still been using 1970s technology in those rebuilds,” Miller explains.

The locomotive acquisition plays an important role for KiwiRail’s strategy to be emission neutral by 2050 and for New Zealand to implement a modal shift to rail also supported by infrastructure modernisation and development.