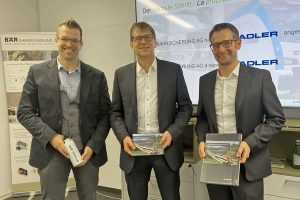 Stadler has taken over Bär Bahnsicherung to develop in-house expertise in the field of signalling technology and digitalisation.

Bär Bahnsicherung in Fehraltorf has been Switzerland’s largest independent service provider for railway safety for more than 30 years. Around 130 employees provide a full range of services in the field of infrastructure-related railway safety from planning, development, engineering and construction of equipment to commissioning and safety tests, including safety reports.

In addition to the proven relay interlocking technology, another central pillar has been added in recent years. The newly developed and type-approved electronic interlocking system Eurolocking, which complements the systems business and which is already used by many Stadler customers in Switzerland. In addition to its headquarters in Fehraltorf, Bär Bahnsicherung has sites in Oensingen, Olten and Lausanne, which will be kept on by Stadler along with all employees.

The two companies complement each other as one brings innovation to rail infrastructure, while the other one provides modern trains which together reach rail’s full potential. Bär promotes the digitalisation of the railway infrastructure with its products, while Stadler’s in-house signalling has so far concentrated in particular on equipping rail-bound vehicles with signalling technology.

For customers, the takeover will create a contact partner who can offer infrastructure and vehicle signalling from a single source. Both Stadler and Bär see this as a clear win for the Swiss rail industry, which will also open up growth opportunities abroad.

Stadler entered the signalling business in 2016 so that it would no longer be dependent on direct competitors in the area. Stadler established its own engineering location in Wallisellen, which became an independent company within the Stadler Group at the beginning of 2020. Stadler’s own Guradia train protection system was approved in 2019 and is already in use in several European countries. It has also been incorporated into BLS’s new Flirt trains in Switzerland since 2021.