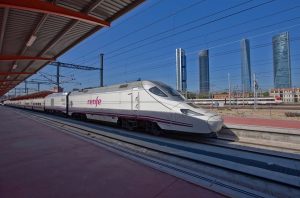 The European Commission has approved a EUR 265 million funding from the European Regional Development Fund for the improvement of 178 km rail section part of Madrid-Lisbon high-speed line on the Atlantic Corridor.

EUR 1.56 billion is the total value of the project which is expected to be completed in December 2022.

The project involves the 178.6 km Plasencia-Cáceres-Badajoz section for which currently, the track is being assembled, the line is being electrified and safety, signalling, telecommunications and auxiliary installations are being set up.

To be used for passenger and freight traffic, the double-track line will be fitted with a 25kilovolt alternating current electrification system and will be equipped with the ERTMS Level 2.

The maximum speed will be 300km/h. To ensure compatibility with adjacent sections, Iberian-gauge track will be laid at first. Subsequent conversion to standard gauge is planned on the entire railway.

The Madrid-Lisbon line will have a total length of 715 km, of which 465 km will be in Spain, running through the autonomous communities of Madrid, Castile-La Mancha and Extremadura.

The construction of the Spanish part of the line is split into three sections, which are at various stages of development. In addition to the Plasencia-Cáceres-Badajoz section, these are the section between Madrid and Plasencia and the 20 km stretch between Badajoz and the Portuguese border, of which 2.6 km is on Portuguese territory. The current project follows on from the laying of the track bed, initial track assembly works and the installation of civil protection and safety facilities in tunnels.