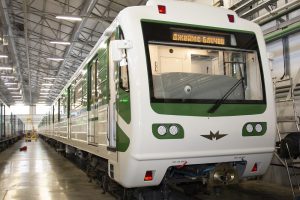 TMH Mytishi Plant has shipped 8 refurbished metro cars to the city of Sofia, which allows an extended lifecycle by 15 years.

The refurbishment of the two four-car metro trains is part of a framework contract signed at the end of 2018 which includes an option to modernise 40 additional vehicles in the coming years.

The two metro trains will again enter commercial services on the first and second metro lines. The trains were manufactured at TMH Mytishi plant.

The refurbished cars retain mechanical and pneumatic compatibility with the other Sofia metro train fleet.

As part of the overhaul process, the tains’ coupling assemblies were renewed, wheel pairs received an anti-skid protection, potentially flammable trim materials were replaced by the ones compliant with modern safety standards, the interiors now have shockproof glass, smoke detectors, and temperature sensors. The tail cars feature zones for wheelchairs and baby strollers. The refurbishment will reduce the operational and maintenance costs of running the trains.