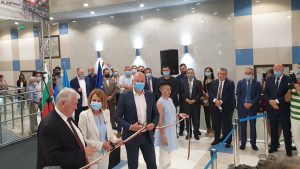 The construction on the first phase began in 2016 when Metropolitan EAD awarded a consortium consisting of Siemens and Newag a contract to equip the new metro line and for the supply of 20 Inspiro metro trains. The trains can travel at speeds of up to 80 km/h. Their floor is a weight-saving, sound-absorbent composite cork-aluminum plate. They also feature a highly redundant traction and brake system, ensuring a high level of availability and electrodynamic braking almost down to standstill. 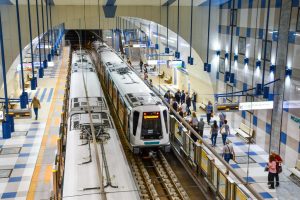 Metropolitan has extended the contract with an option for 10 additional trains as well as the required automation system for the metro operation.

The extended contract included the delivery of CBTC, Interlocking, ATS, voice radio, Power SCADA, DSM and platform screen doors for a further five additional stations. The last train will be delivered by April 2021.

The metro line is expected to carry about 60,000 passengers per day providing a travel time from Krasno Selo to the center of 7 minutes.

The new metro section is expected to remove 14 thousand cars per day which will lead to a reduction of 11 thousand tonnes of emissions. The road traffic on the route will be reduced by 25%, according to the estimations.

At the beginning of 2021, the authorities plan to open the remaining 4 stations of the second stage of the Line 3. The construction works are completed with the needed tests expecting to be soon carried out.

With the opening of the entire metro Line 3, the metro system will attract 50% of Sofia’s public transport traffic, with a daily ridership of 650,000 passengers.

EUR 520 million was the value of the first phase of Line 3, of which EUR 368.2 million was the European funding under the European Regional Development Fund, through the “Transport and transport infrastructure” Operational Programme for the 2014-2020 programming period.