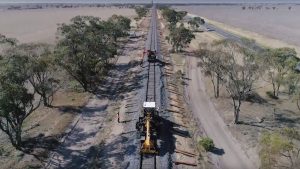 70,000 new sleepers have been installed between Korong Vale and Sea Lake under the Murray Basin rail freight project which will improve the freight transport network across the Victoria state.

“I’m pleased that work has now started on this important 141-kilometre track, which services two major Victorian grain terminals. These works will improve safety and reliability along the line, with four level-crossing renewals and maintenance on more than 3,000 joints,” the Minister for Transport Infrastructure Jacinta Allan said.

The work will continue within the next months to remove the bottlenecks and enhance the rail freight transport by replacing 23,000 sleepers between Inglewood and Korong Vale and nearly 28,000 new sleepers between Dunolly and Inglewood.

The Victorian Government undertook a review of the original project business case, prepared in 2015, backed by industry engagement from farmers and freight operators who wanted to see works commence as soon as possible.

The Murray Basin rail project covers the upgrade and modernisation of the 1,055 km of rail track in north-west Victoria, the track conversion from broad gauge to standard gauge and increasing the allowable train axle loading from 19 tonnes to 21 tonnes. The axle load on the railway section between Ouyen and Murrayville remains at 19 tonnes, on which the trains are already running. This section is part of the second phase of the project which will be completed in five stages.

The project will better connect the industry in north-west Victoria with the ports of Portland, Geelong and Melbourne. It will also improve the performance of the rail network and increase the amount of rail freight able to be moved.