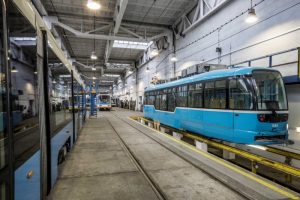 Škoda Transportation and Ostrava City Council signed an agreement for the purchase of 100% stake in Ekova Electric, an Ostrava-based company responsible for repair and production of public transport vehicles.

The share will be transferred to the Škoda Transportation group in 2021, which will contribute to the further development of Ekova Electric.

“The key news is that with the signing of the contract, not only was a decision made about the future of Ekova Electric, but the decision to build a new unique competence center in Ostrava was also definitively made,” Petr Brzezina, President of the Škoda Transportation group, said.

The acquired company will focus on traditional repairs and modernization of vehicles for Dopravní podnik Ostrava, the city’s transport company, as well as for other transport companies. Škoda also plans to manufacture new trams, electric buses and trolleybuses, Brzezina said.

Škoda plans to significantly invest to modernise the plant and its technological equipment. Brzezina stated that “Škoda’s entry into the Ostrava-based company will help stabilize and create new jobs in the Moravian-Silesian Region” where Škoda has been operating for a long time including through its Škoda Vagonka subsidiary which is focused on the development and production of rail vehicles. It is currently undergoing a crucial stage of growth as it is investing CZK 1 billion (EUR 37.6 million) to expand and modernise its facilities, which allows the creation of hundreds of new jobs.

In addition, Škoda’s technological know-how in the field of control, multimedia and diagnostic systems within the Škoda Digital subsidiary is also concentrated in Ostrava.

Dopravní podnik Ostrava, the city’s public transport company, was the owner of Ekova Electric that was established 10 years ago by splitting from the transport operator. By selling the Ekova Electric “to a strong investor is the most advantageous option for us at the given time and place. Other options pose a disproportionately high risk for us. I believe that the choice of the new owner will be beneficial for all parties involved and that history will confirm that this decision was right,” said Daniel Morys, the Chairman of the Board of Directors of Dopravní podnik Ostrava.