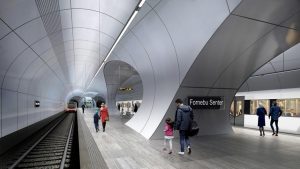 Under the project, Skanska will establish a prepared construction pit ready for the next phase of the Fornebu line construction project. The project includes excavation, blasting, loading, transport and disposal of masses. Handling of contaminated material is a vital part.

The project includes demolition of the existing building mass on the site, as well as rerouting of cables and pipes in the ground. Sheet piling around the construction pit is also a large operation in the project. The project has ambitious climate goals. The construction start is planned to start in December and will be completed in the first quarter of 2023.

The Fornebu station contract is a part of the largest transport project in the City of Oslo in over 20 years. The new Oslo Fornebu metro line will be an 8 km underground extension of the Oslo Metro system which will be served by six new stations. The new line will offer transport connection between the Fornebu peninsula in Baerum, in Greater Oslo Region to the existing Majorstuen T-rail interchange station in Oslo.

The project in the construction of the new extension has a value of NOK 13 billion (EUR 1.2 billion). In June 2019, a financing agreement was signed between the Government of Norway, Akershus and Oslo city councils, together with the municipalities of Bærum, Skedsmo and Oppegård. Under the agreement, the state will cover 50% of project’s cost.

The new line will be constructed within six years and is expected to enter passenger services in 2027.

When completed, the new metro line will provide a 12-minutes travel time between Majorstuen and Fornebu Senter. The line will be operated by six-car metro trains with eight departures per hour which would transport up to 8,000 people per hour.

The project is an important urban development initiative and a catalyst for greener mobility solutions. The scope includes signalling infrastructure, as well as the construction of new maintenance facilities at Fornebu.