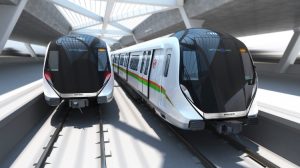 The new trains will be replaced by a new fleet of 66 trains, which are scheduled to arrive in batches from 2021. They are manufactured by Bombardier under a USD 519 million contract awarded in 2018. The contract has an option for 30-year maintenance support, reaching to a total value of USD 1.2 billion.  When these trains will arrive in Singapore, they will enter rigorous testing and commissioning process. The trains are equipped with a self-test system that automatically checks that the trains are fit for operation before daily service commences.

The new trains will incorporate commuter-friendly features such as more open spaces for strollers and wheelchair users, train-borne gap fillers for safer boarding and alighting, as well as modern LCD screens displaying train travel information. The seats can be folded up during peak hours to create more room for passengers, without a reduction in the overall number of seats per train car.

The trains will also be equipped with an integrated suite of condition-monitoring features and sensors to facilitate the detection of emerging faults. This will allow the rail operator to make more efficient use of maintenance resources to pre-emptively rectify potential faults before they affect commuter service. 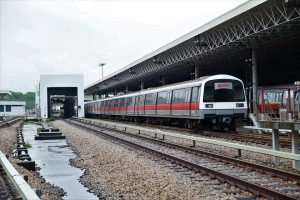 NSEWL train decommissioning process is vital as the Kawasaki trains are reaching end-of-life. They entered services on the North-South and East-West Lines between 1987 and 1989, operating for more than three decades.

The old trains are intended to be used for educational and training purposes, as LTA is in discussion with several public and private organisations, such as schools to retain several units. The trains are also expected to be converted into recreational spaces. The rest of the trains will be handed over to Toyotron Pte Ltd, the contractor appointed by LTA for dismantling, scrapping and disposal services.