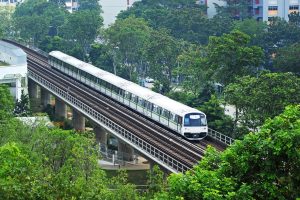 Singapore’s Land Transport Authority (LTA) awarded two civil contracts for the construction of Jurong Region Line (JRL) stations and their associated viaducts. The contracts have a combined value of SGD 526 million (USD 393 million).  The construction works under both contracts are expected to start in the second quarter of 2021 and will to be completed by 2029.

The joint venture of China Civil Engineering Construction Corporation (Singapore Branch) (CCECC) and  SCB Building Construction was awarded a SGD 263 million (USD 196.49 million) contract for the design and construction of two JRL stations – JS11 and JS12 in the vicinity of the Jurong Town Corporation (JTC) industrial area. The contract also includes a 1.1 km viaduct between the two stations along Jurong Pier Road.

SCB is a Singaporean company founded under SCB Group which specialises in building projects. It was previously involved in the upgrading of Tuas depot as well as undertaking addition and alteration works to the Thomson-East Coast Line rail facility building. SCB was also involved in the construction of the Tuas Crescent station and viaducts for the Tuas West Extension as a sub-contractor.

A SGD 263 million (USD 196.49 million) contract was awarded to Hwa Seng Builder Pte Ltd. The contract includes the design and construction of two stations (JW3 and JW4) and a 1.4 km viaduct between the two stations, in the vicinity of Nanyang Technological University (NTU). Hwa Seng Builder is a local company with a wide range of experience in providing construction services.

In July LTA awarded four contracts for the JRL with a total value of SGD 682.5 million (USD 510 million) for station and viaduct construction, signalling and communications systems, the creation of an integrated supervisory control system and the delivery of platform screen doors.

Under the line’s project, also in 2020 the authority signed a SGD 265.4 million (USD 198.28 million) contract for the design and construction of three stations and the associated viaducts.

The Jurong Region Line will have a total length of 24 km served by 24 stations including three interchange stations, improving transport connectivity in the western part of Singapore by serving areas that currently do not have direct links to the rail network.