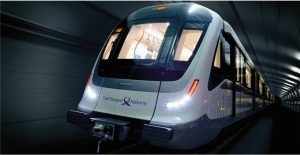 The upgrade works will include digitalising the dynamic route map display (DRMD) from LED to LCD to improve the travelling experience for commuters, installing a train control monitoring system (TCMS) and automatic track inspection (ATI) system software update to increase system performance, while other communication tools will also be enhanced.

“This new contract to boost the performance and functionality of the MOVIA metro fleet on Singapore’s Downtown line is testament to Bombardier’s pioneering technology advances in train optimization and upgrades for our customers,” Jayaram Naidu, the President of Southeast Asia region of Bombardier Transportation said.

The fleet of 92 driverless Movia metro trains was delivered for the DTL between 2013 and 2017. The trains operate the underground line which is 42 km long, served by 34 stations.

DTL, Singapore’s fifth MRT line, offers transport connections to the residential areas such as Bukit Panjang, Bukit Timah, MacPherson and Bedok Reservoir that were previously not served by the MRT. It is providing an alternative commuting route directly connecting people to the city centre cutting  travel time by up to 30 per cent.

The contract is part of authority’s line extension plan. The line will be extended by 2.2 km and two stations, Xilin and Sungei Bedok, in the Marine Parade area.

The extension is expected to be completed by 2024 when will provide more travel options to the CBD and Marina Bay area and easier transfers to the East-West Line (EWL) and the future Thomson-East Coast Line (TEL).

Bombardier collaborates with Singapore for more than two decades. In addition to the DTL metro contract, in 2018 Bombardier was awarded a contract to supply 396 new Movia metro cars for the North-South and East-West MRT lines, which will bring the number of Movia cars in Singapore to 672, making it one of Bombardier’s largest metro fleets in the world.