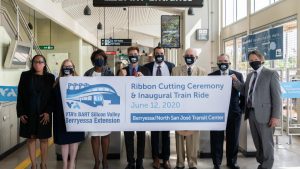 The 16-km railway line needed USD 2.3 billion investment to construct the extension from San José into Santa Clara County. The line begins south of BART’s Warm Springs station in Fremont, proceeds through Milpitas and ends in the Berryessa area of north San José.

This is the first phase of the project with the second phase involving the construction of a 9.6 km of BART system with four stations into east and downtown San José and the City of Santa Clara. It will start from the Berryessa transit centre to downtown San José and terminating in Santa Clara. The Phase II is estimated to carry 52,000 passengers to destinations throughout the Bay Area by 2035.

The construction of the two-station extension project was launched in 2012. The two BART stations are the newest addition to VTA’s transit centres in Milpitas and North San José that opened on December 28, 2019 along with the newly redesigned VTA bus and light rail network to maximise connections to the region’s rapid rail systems, BART and Caltrain.

Milpitas transit centre is located at the intersection of Montague Expressway and Capitol Avenue. It will be served by BART’s Daly City Green line and Richmond Orange line, VTA’s Orange Line, connecting North San José, Sunnyvale, and Mountain View. The station has also link with the bus services and AC Transit’s Route 217. It has also ground-level concourse with below-ground boarding platforms, and a dedicated bicycle storage room with a capacity for 211 bikes. The multimodal, transit-oriented station will connect workers and residents to Silicon Valley’s high-tech employment centres.

The Berryessa transit centre is located between Berryessa and Mabury Road and has connections to the existing transport services of two BART lines and the five VTA bus lines, including the Diridon Caltrain station. The transit centre features new on-street bike lanes and connects to the Upper Penitencia Creek regional trail system. 219 spaces for bicycles were constructed.