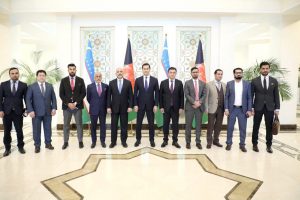 Uzbekistan, Afghanistan and Pakistan signed an agreement on a railway roadmap covering the construction of the trans-Afghan railway line.

The governmental agreement was signed in Tashkent by the Adviser to Prime Minister of Pakistan for Commerce and Investment, Abdul Razak Dawood, the Deputy Prime Minister and Minister of Investments and Foreign Trade of Uzbekistan, Sardor Umurzakov, and by the Minister of Foreign Affairs of Afghanistan, Hanif Atmar. Representatives of the international financial institutions such as AIIB, ADB, EBRD, EIB, Islamic Development Bank, World Bank, which also took part at the event via video conference, expressed their interest to support the project.

As part of the agenda of the meeting, various aspects of the implementation of the project for the construction of the Mazar-i-Sharif – Kabul – Peshawar railway were comprehensively considered. These include practical issues related to the organisation of an international expedition for conducting geodetic, hydrogeological and topographic studies, the preparation of a scheme for the construction of the missing rail tracks and relevant cartographic acitvities, the development of a preliminary feasibility study of the project, as well as the development of effective mechanisms for financing pre-project research, construction management and the distribution of responsibilities of the parties.

The agreement is a continuation of a series of negotiations at the highest official levels, following which on December 29, 2020, the heads of Uzbekistan, Afghanistan and Pakistan sent a joint appeal to international financial institutions with a proposal to support the project covering the construction of new railway lines which will link the three countries. 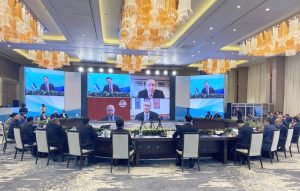 The project covers the construction of the Mazar-i-Sharif – Kabul – Peshawar railway with a total length of 573 km.

It is well known that states of Central Asia and Afghanistan do not have direct access to international seaports and in this regard, they face significant transport and transit costs, which are 2-3 times higher than those of countries with free access to sea communications.

This problem was especially urgent during the COVID-19 pandemic, which imposed significant restrictions on international cargo transport.

Under these conditions, the construction of the trans-Afghan railway line will significantly reduce the time and costs of freight transport goods between the countries of South Asia and Europe through Central Asia. The new rail connection will provide access to the Pakistani seaports of Karachi, Qasim and Gwadar, will connect the South Asian railway system with the Central Asian and Eurasian railway systems and will contribute to a dramatic increase in the transit potential of Central Asia, attracting significant cargo flows and will also revive the region’s historical role as a bridge linking Europe and Asia with the shortest land route.

The implementation of the Mazar-i-Sharif – Kabul – Peshawar railway project will reduce the time and cost of transporting goods along the North-South corridor by 30 percent. Thus, the delivery time of goods from the Russian border (Ozinki station) to Karachi (Pakistan) will be 16-18 days, and from Termez (Uzbekistan) to Karachi, in 8-10 days. According to calculations, in the first years of operation, the volume of traffic can grow to 10 million tonnes.