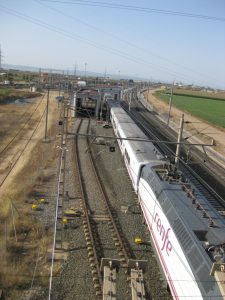 Adif Alta Velocidad has launched a EUR 131.14 million tender for the modernisation of the signalling system and the ERTMS deployment along the Madrid-Sevilla high-speed railway.

The contract, which has a total execution period of 52 months, covers the design, planning and installation, including the testing and commissioning of the ERTMS that will increase the line’s capacity. Under the tender, the ERTMS is planned to be installed throughout the line as well as in the La Sagra-Toledo branch, while the transition between the existing signalling system and the new one must be considered.

The contract includes the replacement of the existing interlocking system with the latest generation of electronic interlocking and ensuring the compatibility with the existing continuous train protection system (LZB). The contract also includes the installation of the gauge changers at the Atocha, Alcolea and Majarabique, the La Sagra-Toledo branch line and the Cerro Negro and La Sagra workshops.

The auxiliary detection systems will be replaced that will communicate with the complementary surveillance and security systems (SCVS) and with the interlocking in whose area they are located.

The power system for the new signalling and communications facilities will also be installed and a centralised traffic control will also be provided to replace the existing one.

The project is co-financed by the European Regional Development Fund (ERDF) through the Pluri-regional Operational Programme.

In addition, the European Investment Bank has recently approved a EUR 320 million funding for the renewal of Madrid-Sevilla high-speed railway. EUR 640 million is the total estimated value of the project that includes the renewal of civil works, tracks, electrification, the deployment of the ERTMS and the telecom system along the 470 km-long line.

The line has 32 viaducts with a total length of 8,355 metres. The two most important are the viaduct built for the Ciudad Real line, which at 930 metres is the longest of all, and the viaduct crossing the Tajo and Guadálmez rivers, which is 800 metres long and has 78 metre-high piers.

Along the line, 17 tunnels were constructed with a total length of 16,030 metres, of which the longest has 2,540 metres.

Madrid-Sevilla line is electrified at 1 x 25kV AC while the signalling system is represented by the ASFA200 and LZB. The line is equipped with the Digital Train-Ground based on GSM-R system.