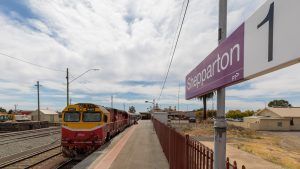 UGL, Siemens and Integrated Rail Engineering Services will start the installation of the new signalling system on the Seymour and Shepparton lines to control trains between Craigieburn and Seymour in Victoria.

The AUD 9.4 million (USD 6.86 million) project covers the new signalling system which includes complex connections into the metropolitan system and existing V/Line signalling. All Systems Contractors will complete the construction while signalling installation works will be undertaken by V/Line signalling engineers.

Enabling works for the electronically operated signalling have commenced in Kilmore East, which will be supported by modern telecommunications systems.

The works will also replace the antiquated manual double line block signalling with an automated system, and remove the aerial power and telegraph wires, which have been repeatedly subject to theft and vandalism.

During the works, V/Line will also complete more than AUD 7 million (USD 5 million) in track improvements while coaches will replace the trains on the Seymour and Shepparton lines until 8 May. Works include replacing more than 20 km of rail between Wallan and Broadford.

The Victorian Government is implementing the Shepparton Line upgrade project with the first phase being completed allowing 10 extra train services a week between Melbourne and Shepparton, a stabling upgrade at Shepparton station and 29 extra coaches between Shepparton and Seymour. The Stage 2 of the project is underway which includes platform extensions at three stations (Mooroopna, Murchison East and Nagambie) a 1.1 km crossing loop extension near Murchison East to enable trains to pass each other, 59 level crossing upgrades between Donnybrook and Shepparton and a business case will finalise the scope and costs for delivering 9 return services a day between Shepparton and Melbourne. The construction contract for Stage 2 of the Shepparton Line upgrade has been awarded to Coleman Rail and KBR as part of an alliance with Rail Projects Victoria and V/Line. The second stage is expected to be completed in late 2022.

The AUD 400 million (USD 292 million) third phase is currently underway and includes the signalling upgrades between Seymour and Shepparton to enable nine weekday return services, the expanded stabling for VLocity trains to support more services, track upgrades between Seymour and Shepparton to enable trains to travel faster and further extension of the Murchison East crossing loop to boost capacity on the line. Stage 3 of the projec is targeted for completion by the end of 2023.

The Shepparton Line upgrade has a total estimated cost of AUD 750 million (USD 547.4 million) and creates more than 600 jobs.