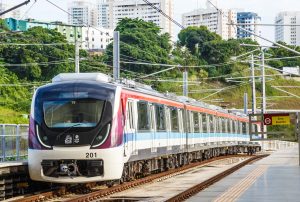 Companhia de Transportes do Estado da Bahia awarded Siemens Mobility a contract to install the GoA2 system on the extension of Line 1 in Salvador, Bahia, Brazil.

The CBTC signalling system will be fully implemented across the 5-km extension served by two new stations, that will connect Pirajá to Águas Claras/Cajazeiras.

The full integration of the extension to the existing Line 1 will provide for greater availability, enhanced operations, and a better passenger experience. This contract builds on the already well-established relationship Siemens Mobility has with the Salvador Metro and CCR Metrô Bahia.

Siemens Mobility will provide the software update for all onboard units on the existing 40 train fleet and for both Operation Control Centers, the main one and the backup. The contract also includes the installation, testing and commissioning of a radio system, electronic interlockings, and wayside equipment.

Siemens has previously delivered and installed the signalling, train control, catenary and telecommunications systems for Salvador Metro. The control system Trainguard MT, implemented by Siemens Mobility between March 2015 and July 2018, allows for the automatic train operation to be activated with a train operator onboard (the GoA2 system). Even though the conductor starts the train manually, the system automatically takes over acceleration/braking and speed control between train stations and determines the train’s stoppage and the opening/closing of doors at stations. The system also allows for driverless maneuvers in the turnback areas.

In developing the telecommunications system, Siemens Mobility successfully integrated the data transmission, fixed communications, multimedia, message panel and timing, as well as the electric monitoring and radio subsystems. Siemens Mobility was also responsible for the complete catenary supply in 3 kVcc for the trains.

The Salvador Metro started operations in 2014 and is managed as a Public Private Partnership (PPP) by concessionaire CCR Metrô Bahia and the State of Bahia’s Administration. The system comprises two metro lines extending 32 km, with 20 stations, two Operation Control Centers, two depots. The network is operated by 40 trains and has a daily capacity of 370 thousand passengers.