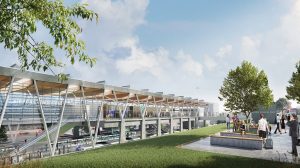 The organisations shortlisted to tender for the surface and civil alignment works contract on the Sydney Metro – Western Sydney Airport project are:

The winner of the contract will be responsible for the construction of more than 10 km of viaducts, bridges and embankments that will support railway tracks and associated infrastructure.

The Australian and the New South Wales governments are jointly delivering the Sydney’s Western Airport metro  which will have 23 km and six stations between St Marys and the Western Sydney Aerotropolis, including two stations at the airport terminal and at the airport business park.

At St Marys station, the line will have transport connections with the existing suburban railway station and connecting passengers with the rest of Sydney’s rail and public transport system.

Orchard Hills station will service a future commercial and mixed-use precinct, the Luddenham, station will provide transport connection to the future education, innovation and commercial district. A nee station will be constructed at the commercial heart of the Western Sydney Aerotropolis – the area proposed to be named Bradfield.

The city-shaping project, from St Marys through to the new airport and the Western Sydney Aerotropolis, will provide a major economic stimulus for western Sydney.