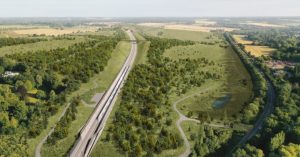 HS2 Ltd has shortlisted four companies to deliver and install the signalling and control systems for the Phase 1 and Phase 2A of the British high-speed railway line. The contract is expected to be awarded in 2022.

The contract involves the design and build of the signalling systems that will control trains travelling at speeds of up to 360 km/h between London, Birmingham and Crewe, where HS2 trains will join the existing West Coast Mainline.

The signalling and control systems contract covers the Control, Command, Signalling (CCS) and Traffic Management (TM) systems which include:

Instead of traditional coloured lights, HS2 will use a high-tech signalling system that feeds information directly into the cab, allowing faster and more frequent services.

In December, HS2 Ltd shortlisted the bidders for the track systems and for tunnel and lineside mechanical and electrical (M&E) systems.

Recently, the Phase 2A north from the West Midlands to Crewe has received the Royal Assent.