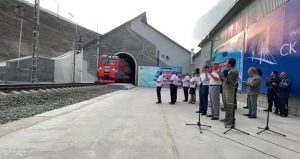 On July 28, the Russian President Vladimir Putin has inaugurated via videoconference the opening of the second Baikal tunnel, the most important structure of the modernization programme of Baikal-Amur and Transsib main lines. Oleg Belozerov, the Chief Executive Officer of RZD, Alexey Tsydenov, the Head of the Republic of Buryatia and Ruslan Baisarov, Chairman of the Board of Directors of USK Most, took part in the inauguration ceremony at the eastern portal of the tunnel.

“We are launching railway traffic through the second Baikal tunnel. It goes without saying that the tunnel’s creation is an important achievement for the national transport sector and the entire Russian economy,” Vladimir Putin said.

The construction of the tunnel began in 2014 and took five and a half years and it was opened five months ahead of schedule. A total of 6,682 metres of tunnel were excavated underground through the Baikal ridge and 427 km of cables were laid. In all, 1,500 workers and over 100 units of mining and road construction equipment and vehicles were involved for the construction of the tunnel. It is laid at a depth of up to 300 metres with lining diameter 8,3 m and 10,2 m when sinking. The tunnel is equipped with video cameras with have self-cleaning optics

The new tunnel crosses the Baikal Mountains and links two of the Russian regions. The western portal is situated in the Irkutsk Region and the eastern one, in the Republic of Buryatia, in eastern Siberia. It also connects the Siberian and Far Eastern Federal Districts.

The new Baikal tunnel is situated 35 away from the old existing tunnel which during construction was not closed and allowed train traffic to not disturb the freight services.

The Baikal tunnel is Russian Railways’ third longest tunnel and it is a unique structure.

Belozerov said that this year the first stage of the Eastern Polygon railway infrastructure development and modernisation project will be completed according to the schedule. “At the same time, we have started the second stage and we are slightly ahead of schedule. On your instructions, we are considering the third stage of the project, together with the Government and the Ministry of Transport. In the near future, we are going to prepare, together with the shippers, a model of the optimal development of the third stage,” Belozerov explained.