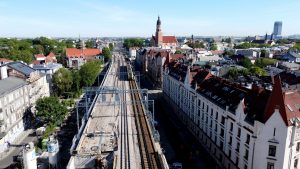 PKP Polish Railway Lines will complete the construction of the second track of Krakow cross-city line on the route between the central station (Kraków Główny) and Kraków Płaszów station. The tracks are already laid, while dynamic tests have been carried out on the railway viaducts over the Powstańców Wielkopolskich, Dekert, Kopernika and Grzegórzecka streets. The second of the three bridges over the Vistula will also undergo a similar test.

The new double track runs along new flyovers in the center of Krakow and on the modernised viaducts over six streets.

The Polish rail infrastructure manager announced that starting June 12, the trains will be able to use the new double track rail connection improving long-distance and regional transport.

The main track will allow long-distance trains to run at speeds of up to 100 km/h, while the branch lines are designed for regional and suburban traffic. The project covered the construction and modernisation of four tracks which will facilitate the rail transport and will provide the opportunity to introduce additional connections.

The construction of Krakow cross-city line is co-financed by the European Union through the Connecting Europe Facility and is the largest transport investment in Krakow which benefits EU funding. Under the CEF 2015 call, the “Works on the E30 railway line, Kraków Główny Towarowy-Rudzice section, including the construction of metropolitan line tracks” project with EUR 240.9 million eligible cost received a EUR 194.9 million EU co-financing. PLN 1.2 billion (EUR 259 million) is the total value of the project expected to be completed in December 2023.

The project will result in the construction of double track lines on the Kraków Główny – Kraków Płaszów section and the modernisation of railway lines no. 133 and 91. The security will be improved through construction of two new local control command and signalling centres (Kraków Główny, Kraków Płaszów). Three new railway bridges over Vistula River will be built together with two new passenger stops (Kraków Grzegórzki, Kraków Złocień) while four existing stations will be modernised. Power feeders will be reconstructed and electric power connections will be upgraded.

The implementation of the project will remove the bottlenecks due to increased capacity and in shorter travel time while the interoperability and safety will be improved due to the upgrade of the parameters of the railway infrastructure.