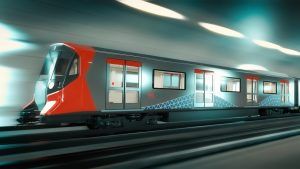 Alstom won a EUR 355 million contract to deliver its Urbalis CBTC signalling system along with 20 years of maintenance and 37 Metropolis trains to Santiago Metro in Chile.

The new trains, combined with the CBTC signalling system, will help optimise the capacity, throughput, and efficiency of the new Line 7, whose inauguration is planned for the end of 2027.

The trains will be manufactured at Taubaté plant in Brazil and the first cars are expected to be delivered in 2025.

Each 102-metre automatic Metropolis train will have a capacity to transport up to 1,250 passengers and deliver an improved passenger experience. The metros will feature 4 wide doors on either side to facilitate passenger ingress and egress, as well as wide aisles and open gangways between cars to ensure passenger fluidity inside and in between cars.

The Metropolis trains for Santiago Metro will also feature air-conditioning and an advanced passenger information system that displays route and station information, while security features such as high-resolution external cameras and intercoms that maintain passenger communication with the control centre will enhance passenger and infrastructure safety.

The CBTC signalling system will be installed on the 26 km line, which will reduce the headway between trains, maximising the system’s capacity, and will help improve energy efficiency of operations. Alstom will also integrate advanced rail cybersecurity measures to improve the protection of Line 7’s train control systems for both trains and signalling.

The Line 7 served by 19 stations will cross through seven communes three of which being incorporated for the first time within the Metro network (Renca, Cerro Navia and Vitacura). The investment amount for Line 7 amounts to USD 2.5 billion.

When Line 7 is operational, the expected travel time between the future terminal stations is estimated to be 37 minutes, which means a 54% reduction in travel time compared to what it takes today through the bus system (80 minutes).