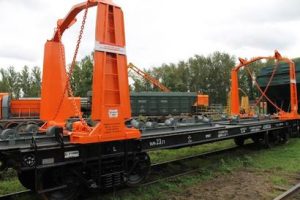 The machines have been tested and shipped to the Russian Railways which plans to use them at the polygons of the Krasnoyarsk, the Sverdlovsk and the West Siberian Railways.
Besides, two PM-820 universal platforms were manufactured for testing required to extend the Certificate of Compliance of the Technical Regulations of the Customs Union (TR CU). The previous certificate expires in 2021. The platforms have successfully passed the certification tests at the factory, and now they are to be tested at the Belorechensk polygon, in the Krasnodar Region.

The Yaroslavl car–repairing plant has been producing PM-820 platforms for more than ten years. The platform is designed for transporting materials and equipment at repair of railway tracks, which makes it relevant for on-going production. The carrying capacity is 63 tonnes, and the service life is over 30 years.

The unified removable equipment (URE) on the platforms is used to transport assembled rail and sleeper packages with rail length of 12.5 m and 25 m. A customer receives from the enterprise the turn–key self–contained trains ready for work.

“In 2021, the Yaroslavl plant started commercial production of one of the PM-820 platform largest components, a portal for unified removable equipment designed to hold the assembled rail and sleeper packs and fix limiting chains. Previously, the portals were ordered from some third–party suppliers. Increasing the scope of competencies is one of the primary tasks of our company,” Dmitry Morichev, acting executive director of the Yaroslavl plant Remputmash, said.

Remputmash Group is a Russian manufacturer of track machines and technologies. The company includes six enterprises and six branches located in different cities of Russia, as well as 45 repair and service centres.