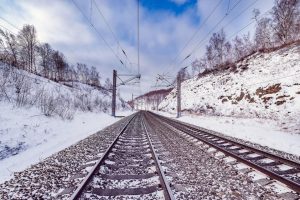 In 2019, Russian Railways modernised 422.7 km of tracks, as part of its infrastructure development programme. RUB 264.7 billion (USD 4.3 billion) was the value of the investment allotted last year for the projects.

Comprehensive reconstruction works were carried out on the M. Gorky-Kotelnikovo-Tikhoretskaya-Krymskaya railway line and a new 128.8 km of double-track electrified section bypassing the city of Krasnodar was commissioned.

In addition, RZD constructed 150 km of additional tracks and more than 100 km tracks at the stations were modernised and integrated with the existing network.

400 km of railway lines were electrified at some selected stations, while 375 of tracks were equipped with new interlocking devices and 782 new turnouts were laid.

Under the Presidential and governmental instructions, the projects envisaged integrated infrastructure projects, jointly funded by the RZD, federal and local budgets. The projects had a targeted total budget of RUB 167 billion (USD 2.7 billion). They included Baikal–Amur Mainline and the Trans-Siberian Railway modernisation (the second stage), comprehensive reconstruction of the Mezhdurechensk–Taishet line, Moscow transport hub development, the renovation of the railway infrastructure on the approaches to the ports on the Azov-Black Sea Basin and on the North-Western Basin, building up the railway infrastructure on the Northern and Sverdlovsk railways to increase freight transport capacity.

Russian Railways own projects had an estimated value of RUB 523 billion (EUR 8.4 billion). The infrastructure development projects included electrification and modernisation works for nine projects, as well as the development of new rail sections and transport hubs. These projects were estimated at over RUB 11 billion (USD 180 million).

The rolling stock renewal programme included the update of the traction and multiple unit fleet. The value of this programme was estimated at RUB 141.3 billion (approx. USD 2.3 billion).