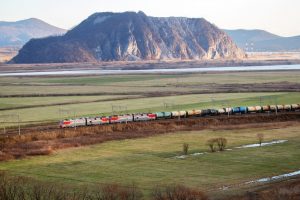 A project for passenger trains running on hydrogen fuel cells on the island of Sakhalin as an example.

“Hydrogen technologies are developing rapidly and the cost of fuel cells is decreasing, so we expect and hope that the real cost of introducing hydrogen energy in the near future will be commensurate in cost with the transition to natural gas,” Andreev said.

Currently, Russian Railways, together with All-Russia Research and Technological Institute (VNIKTI) and Railway Research Institute (VNIIZHT), are implementing a project to modernise company’s existing mainline freight and shunting locomotives and to convert them from diesel to gas–diesel vehicles.  “The design documentation is expected to be completed in 2022. As we gain experience in this area, we will consider the possibility of switching diesel locomotives over to hydrogen technology,” Vladimir Andreev explained.

Along with partners from mechanical-engineering and railway design institutes, the design and production of freight mainline and shunting locomotives running on gas with a hybrid power plant and storage fuel cells are being carried out simultaneously.

The use of these new types of rolling stock is being planned for the Far East, in tourist regions, and in urban areas.

The locomotives that are running on alternative energy sources will reduce emissions of harmful substances into the atmosphere by 100%. They will also reduce noise levels and energy costs, which is especially important in shunting.

In April, TMH-Energy Solutions and Rusatom Overseas agreed to establish a joint venture responsible for the development of hydrogen fuel cells trains which will be operational on the rail network of Sakhalin Region.