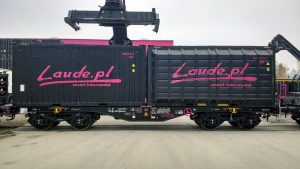 The European Union Agency for Railways (ERA) provided United Wagon Company the approval for its flat cars to operate on the European rail network according to the Directive (EU) 2016/797.

The certification was awarded for UWC’s Sggrs(s) 80’ six-axle and Sgmmns 40’ four-axle flat cars. For the first time in modern Russian history, domestic freight cars will be operated in Europe on a gauge of 1,435 mm. Company’s current order portfolio for European countries exceeds 1,000 wagons.

“The approval of the series-produced freight cars by a European regulation authority represents a significant step forward for us both in terms of fulfilling our contracts and as part of the development of company’s export strategy,” Victor Dolgov, the Deputy CEO, Production and Supply at UWC said.

ERA, the European Regulator, issued the permit based on the results of freight car testing, production audit and series of certification tests for compliance with TSI, organised by the Czech Railway Research Institute (VUZ). Russian-made flat cars designed to transport heavyweight containers in European countries have successfully passed the strength tests for static load and impact, stationary and in-motion brake tests, dynamic and strength testing in motion, and noise impact tests.

As part of the technical acceptance process, the client’s representatives performed a comprehensive assessment of technical specifications of the series-built freight cars for compliance with European standards. Thus, over 100 key parameters of the Sggrs 80’ six-axle articulated flat car were assessed, including size checks, brake system tests, paintwork inspection and non-destructive weld control, etc.

The export Sggrs(s) 80’ and Sgmmns 40’ flat cars have been developed by the UWC’s engineering centre and are manufactured at the Tikhvin production site.

United Wagon Company was helped by the Trade Mission of the Russian Federation in Germany, which rendered administrative support facilitating the approval process in the situation of international travel restrictions due to COVID-19.