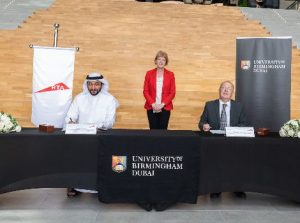 The Roads and Transport Authority (RTA) signed an agreement to establish its Research and Innovation Centre at the University of Birmingham’s new campus at Dubai Academic City. This partnership will provide the premises to create a facility that will help drive RTA’s innovation agenda and support the next generation of UAE innovators, start-ups, universities and the technology companies to collaborate effectively to manifest latest innovations in the areas of transportation and mobility.

Nasser Abu Shehab, the CEO of Strategy and Corporate Governance on behalf of RTA and Professor David Sadler, at the University of Birmingham Dubai Provost signed on behalf of the University in the presence of Wendy Morton MP, Minister of State in the Department for Transport, visiting the campus whilst representing the UK Government in the UAE.

“This partnership between Dubai and the University of Birmingham is a fantastic opportunity to drive innovation in transport and create exciting opportunities for research and education,” Wendy Morton said.

The signing builds on an agreement signed in 2019 to develop the education and research programme which has resulted into one-of a kind partnership between the authority and a university to establish an Innovation and R&D Centre inside of a university. The Centre which is 1,151sq m, spread across two floors will features co-working spaces, protype areas and facilities to conduct Innovation Labs and Training Programmes.

The centre will support an education and research programme based at the campus, which opens shortly to deliver a flexible, hi-tech student experience that is both enjoyable and productive and iconic in architectural terms, even by Dubai standards.
Further to the vital areas of innovation and experimentation, the centre will also aim to support and strengthen the collaboration between the two organisations in the areas of education and training programmes and scientific research.

The new innovation hub at Dubai Academic City “is an important milestone in ‘RTA’s Innovation Roadmap’ as it will not only provide tools and resources to enhance the culture of Innovation and experimentation at RTA, but it will also allow RTA to effectively engage with external ecosystem,” Nasser Abu Shehab said.

The transport education and research programme provide a means for RTA to access all academic programmes offered by the University and take part in research and consultancy studies for the benefit of the Dubai economy and the UAE.