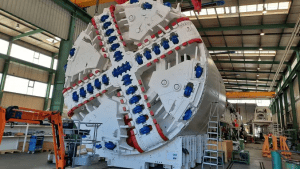 Infrastructure Ontario (IO) and Metrolinx have released a Request for Qualifications (RFQ) for the second advance tunnel contract (ATC2) package on the Eglinton Crosstown West extension (ECWE) in Toronto.

Following this procedure, the authorities will select the contractor to deliver the ATC2 work on the project.

The extension of the Eglinton Crosstown West covers the construction of a 9.2 km light rail section with 7 stops, of which approximately 6 km will be underground. The new line will be known as the future TTC Line 5. The extension will run mostly underground, westward from the future Mount Dennis station to Renforth Drive.

The Ontario Province will also release a RFQ for the transit project’s elevated section of tracks between Scarlett Road and Jane Street in the coming weeks. IO and Metrolinx will evaluate the submissions and announce a shortlist of qualified proponents for both contracts in the first quarter of 2022.

These will be followed by a separate contract for the balance of the work, which includes building the stations, fitting-out the tunnels and installing and commissioning the systems. The Advanced Tunnel Contract 1 (Renforth Drive to the extraction shaft at Scarlett Road) project is currently under construction. The contract for the first advance tunnel between Renforth Drive and Scarlett Road was awarded in May to the West End Connectors. The design build finance contract includes the construction of launch and extraction shafts, tunnels, and headwalls for emergency exit buildings and stations, the supply of the TMBs and install segmental precast concrete tunnel liners.

The Eglinton Crosstown West extension is being delivered in four separate procurement contracts comprising the first and the second advanced tunnels, the elevated guideway between between Scarlett Road and Jane Street and the stations, rail and systems.

Once complete, the ECWE will connect to different transit services, including the GO Kitchener Line and UP Express train service at Mount Dennis, TTC bus services at transit stops in Toronto, and GO and MiWay bus services via the Mississauga Transitway.