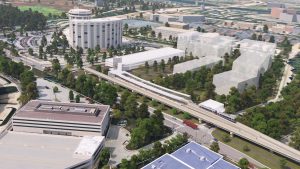 The Southeastern Pennsylvania Transportation Authority (SEPTA) has released the Request for Proposals (RFP) for the final design phase of the King of Prussia rail project (KOP Rail) in Greater Philadelphia Region.

The project covers the construction of a 6.4 km elevated extension with five stations from the any station on the Norristown High Speed Line (NHSL) into King of Prussia providing a “one-seat” ride from any station along the NHSL, including 69th Street Transportation Center in Upper Darby and Norristown Transportation Center. The extension will go west starting from a point between the existing NHSL Hughes Park and DeKalb Street stations, and end at First Avenue and Moore Road in Moore Park KOP.

USD 2 billion is the value of the project with operation and maintenance costs being estimated at USD 5 million each year. The Philadelphia regional transport authority included USD 390 million for the project under the capital budget strengthening its commitment to leverage additional federal funding. The KOP Rail is currently funded through a federal grant and SEPTA will further seek up to 50% of the project’s funding from the Federal Transit Administration’s (FTA) New Starts Programme, which can fund extensions to transit systems, like the Norristown High Speed Line.

In October 2021, SEPTA announced that the King of Prussia rail project entered development phase under the FTA Capital Investment Grant programme During this stage of the project, SEPTA is focused on evaluating program delivery options and completing 30% design of the infrastructure.

The project development phase is expected to be completed by the autumn of 2022 with construction scheduled to start in 2024. The new rail connection will enter operation by the end of 2027.