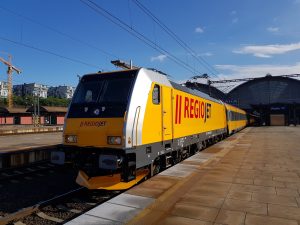 The new international open access train line is currently being planned and will soon be submitted to request railway capacity.

The night train service which will connect Prague, Dresden, Berlin, Amsterdam, and Brussels is planned to be launched in 2022.

It will depart in the early evening from Prague via Dresden and Berlin to Amsterdam and terminate in Brussels, where it will have a morning arrival, ideal for meetings for example with the EU institutions, RegioJet says.

The return trip will leave Brussels early evening, stop at Amsterdam on the way to Berlin, Dresden, and Prague, where it will have a convenient arrival time in the morning.

The two companies will cooperate with other railway entities to operate the train and sell tickets on individual markets involved. The trains will offer travelling both on seats and in sleeping compartments and have full RegioJet on-board service – including free internet access, free coffee and other services. As with other connections, the policy of the best prices for the best services is envisaged.

At the same time, preparation of this connection is a part of an active approach towards the 2021 Year of Rail initiative. The five cities are destinations that are ideal for travelling by night trains both for tourist and business purposes and launch of such a service can make railways more attractive for travelling between key European capitals.

This is European Sleeper’s first connection and intends to set up a network of overnight sleeper trains from the Netherlands and Belgium to relevant destinations in Europe.

The new service is part of RegioJet’s expansion plan on the night train connections’ segment. This year, the company intends to start a new night train service from the Czech Republic to Ukraine, connecting Prague, Przemyśl (Poland) and Lviv.

The two companies plan to further develop new night train connections on other routes in Central Europe together.