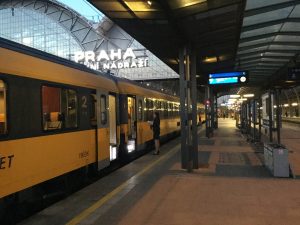 RegioJet has launched on July 31 the Prague–Vienna–Budapest train, another rail service with reduced ticket prices and increased comfort for passengers.

For Prague – Budapest services, the price starts from EUR 16 and for Vienna – Budapest, from EUR 9. The operator has already pre-sold thousands of tickets for its new connections.

Radim Jančura, the owner of RegioJet, said that by launching the train services the rail transport with high prices on the route is at its end.

As part of the ticket price, passengers on RegioJet trains have included free seat reservations, the possibility of free internet connection or the of press and other services, On the new Budapest line, the operator will offer a complete range of its board services in four classes – standard, low-cost, relax and business. Also, the Astra coach with individual screens in each seat with the possibility of watching movies, listening to music and other entertainment content will be part of each train set.

At the standard, relax and business classes, passengers have free coffee and bottled water and have the opportunity to order additional snacks at discounted prices. For the low-cost class, passengers can also order snacks, using an online ordering system with delivery of snacks on the seat.

The Prague–Vienna–Budapest train connects the three cities via Györ and Mosonmagyarovar twice a day in each direction.

In addition to the new connections, RegioJet has already fully resumed the operation of its trains between Vienna, Brno and Prague, where 4 trains run daily in each direction. The Czech rail operator will co-operate with Westbahn in Austria and Continental Railway Solution in Hungary on operating trains on the new line.

“We are coming to another route with our vision to significantly reduce costs of train travel for passengers and offer the widest range of our services. We also offer our train connections to passengers between Vienna and Budapest, for prices starting at EUR 9 to offer them possibility how to travel comfortably by train than for non-sense prices by present state operators. Now, everyone can afford travelling by train between Prague – Vienna and Budapest,” Ivana Kašická, director of RegioJet, said.

At the end of June, when 30,000 tickets were already sold, RegioJet launched new train connections from Prague to Rijeka, which have become a phenomenon of this summer season.

In 2021, the company plans to expand its operation to other routes connecting the Czech Republic, Slovakia or Austria with Poland and Ukraine, and to train routes in other countries.