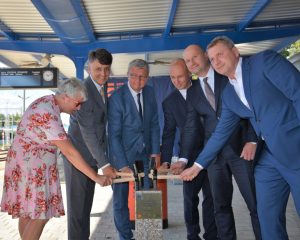 The construction work will last two years and is expected to be completed in the summer of 2022.

The reconstruction is being carried out by BAK stavební společnost. It will include a new facade and its insulation, a new roof, replacement of windows and doors, modification of wall and ceiling surfaces and new floors, as well as replacement of interior doors. Major layout changes will be in the departure hall, relocation of cash desks and creation of other commercial premises will take place there.

“Beroun railway station deserves reconstruction due to its occupancy and not just for that reason thought. It is the second busiest station at the level of the Central Bohemian Region, with approximately six thousand passengers using it daily. We want to bring them adequate comfort and revitalise the entire building significantly,” said Jiří Svoboda, Director General of Správa železnic. 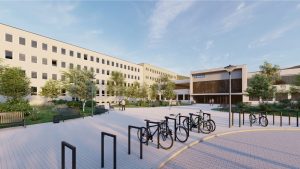 New distributions such as sewerage, water, heating and wiring are going to be built throughout the entire complex of buildings. The building will be newly equipped with air conditioning system. The construction work will also affect the underground floors, where a new waterproofing of the walls below ground level, renovation of the cellars and removal of humidity will be carried out. The reconstruction will further solve the expansion of the information and security system.

“The start of the reconstruction of the station building in Beroun is another example of the large-scale investment that has been made in railways in recent years. Only in the Central Bohemian Region are being carried out reconstructions of station buildings for 374.4 million crowns [EUR 14.1 million] at present. The largest is just Beroun for 288 million crowns [EUR 10.85 million]. Work is also underway in Mnichovo Hradiště, Křivoklát and Lysá nad Labem,” the Minister of Transport Karel Havlíček said.

The reconstruction of the station building in Beroun has a velue of CZK 288 million (EUR 10.85 million) and is funded by the EU through the Cohesion Fund under the Operational Program Environment 2014 – 2020. CZK 18.9 million (EUR 712,164) is the European financing and the remaining investment is covered by the national budget through the State Fund for Transport Infrastructure.