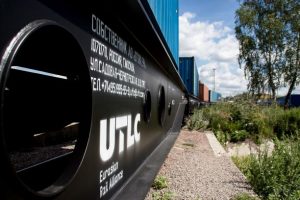 Rail container transport between Asia and Europe is getting back to normal helping to prevent bottlenecks in supply in European markets caused by the coronavirus, UTLC ERA announced. With the situation in China regarding the spread of COVID-19 stabilising, and the economy there gradually returning to normal, freight transport between China and Europe is also beginning to run normally again.

The operator has also said that at the same time it records an increase in bookings for its container capacities.

Travelling 1,100 km per day, the container trains cover the route from the Chinese to the European border in less than 5 days, UTLC being responsible to offer complete door-to-door transport service on the 1520 mm broad-gauge track along the New Silk Road.

“Rail transport continues to provide a safe and reliable link between economies, countries and companies. UTLC’s container trains are all in operation. And goods transport by rail is running smoothly, even though COVID-19 is forcing us to reduce the level of direct human contact,” said Alexey Grom, CEO of UTLC ERA.

More than 550 container trains operated by UTLC ERA have travelled on the route between Europe and China since the beginning of 2020. And since the end of February/beginning of March, the number of bookings has been on the increase again.

The average transport time by sea from China to Europe is 6 weeks. By rail along the New Silk Road, this time is reduced to 11 days.