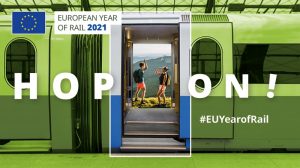 Rail Forum Europe is calling an extension of the 2021 Year of Rail until December 2022 due to the difficulties raised by the current sanitary context which is affecting the activities to promote the rail transport.

The European Parliament association dedicated to rail transport has sent an open letter to the European Commissioner for Transport Adina Vălean on June 21, asking for the extension.

“When in the course of 2020 the EU decided to dedicate 2021 to celebrate railways, nobody could foresee that the pandemic would last this long, with the ongoing effects everybody can see today,” the letter says.

While the epidemiological situation continues to improve in many Member States and the roll out of vaccination campaigns in Europe is further accelerating, it is regrettably clear that during the past few months efforts to promote rail have been significantly affected by the pandemic.

The situation unfortunately will continue to prevent any possibility to organise in-person events and other public gatherings at least for the first half of this year. The 2021 Year of Rail is a unique opportunity to showcase rail and its key contribution to EU citizens and business, and to a smart, digital and sustainable mobility system that reconciles performance and reduction of CO2 emissions.

“In order to make the most out of the unique opportunity and of the resources put in place by all the supporters of the Year of Rail, we invite you to consider the possibility of extending this outstanding initiative until December 2022 in order to make it an even greater success,” Rail Forum Europe mention in the open letter signed by the association’s president Andrey Novakov, the Vice-Presidents Anna Deparnay – Grunenberg and Istvan Ujhelyi, as well as by its members.

In April, other three rail associations – CER, EIM and UNIFE – have also stressed the importance of the extension of the European Year of Rail until December 2022 as the pandemic situation imposes measures that jeopardize the full implementation of the activities.

On March 29, the Year of Rail has been launched during the Portuguese Presidency of the Council, when the Connecting Europe Express train, which is the emblematic project of the initiative, has officially kicked-off.  The train project, coordinated by CER, will travel 20,000 km of lines crossing 26 European countries within 36 days.