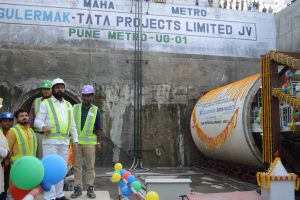 India’s Minster for Urban Development, Eknath Shinde, has inaugurated the second Tunnel Boring Machine for Pune metro which performs tunneling works for a 5-km stretch between Range Hill and Swargate.

This underground section is part of the Line 1, linking PCMC and Swargate on a 16.6 km line, of which 11.5 km will be elevated. The Line 1 will have 15 stations, with 9 elevated and 6 underground stations.

The first TBM has started the tunneling work on 30 November 2019.

“The metro work is complex, difficult, high tech and sophisticated. I am sure Pune metro will finish the work before time,” the minister said.

In December, the minster has unveiled the metro train prototypes which have already entered trials along the 6-km section between Sant Tukaram Nagar and Phugewadi stations.

In August, Titagarh Firema was awarded a contract for the supply of 102 aluminiu-body metro cars, which will operate the Line 1 .

In March, Alstom won a contract for the design and installation of Urbalis 400 solution for Corridors 1 and 2, to control 31 trains on the 32-km-long lines. 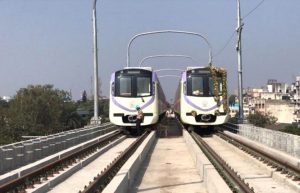 In 2019, the EIB allotted EUR 600 million loan for Pune metro rail project, which has a total value of EUR 1.78 billion. The city of Pune has also received a EUR 245 million financing from the French Development Agency.

The physical progress achieved so far has been approx. 37%.  It is expected that the Line 1 will be operational in 2021.

The city of Pune is also constructing the Line 2, connecting Vanaz and Ramwadi on a 14.6 km elevated line, served by 16 stations.