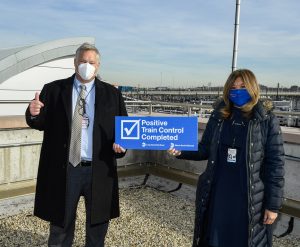 The New York’s MTA Metro-North Railroad President Catherine Rinaldi and Long Island Rail Road President Phil Eng announced have announced that all the MTA trains are operating with the Positive Train Control technology (PTC), ahead of the federal deadline set for December 31.

“There is no higher priority at the MTA than safety, and full PTC implementation brings our railway operations to the next level. This technology will prevent future collisions and ultimately help save lives across our more than 500-mile commuter rail systems,” Patrick J. Foye, MTA Chairman and CEO said.

Through the Positive Train Control , LIRR and Metro-North trains automatically communicate in real time with central dispatching offices sharing information on train position, speed and the actions of the locomotive engineer. If a train is traveling too fast, the system automatically takes control of the train to slow it down while alerting the engineer.

The system is designed to reduce the potential for human error to contribute to train-to-train collisions, trains traveling into zones where rail employees are working on tracks, or derailments caused by a train traveling too fast into a curve or into a misaligned switch. It relies on a network of transponders spaced every one to two miles depending on interlocking density. Metro-North has 3,800 transponders and LIRR has 4,274.

All the rolling stock, including revenue and work trains, have on-board computers. MTA staff and personnel from Systems Integrator Siemens and Bombardier have worked together around the clock for months to ensure the timely delivery of this system.

In the final steps toward reaching the milestone, the Long Island Rail Road achieved full interoperability with Amtrak, and Metro-North completed New Haven Line boundary integration route testing, both completed at the beginning of December. Both rail companies, in November, achieved safety plan approvals from the FRA and successfully continue implementation despite facing challenges, such as delayed delivery of system software earlier in the year and, and COVID-19 impacts since March.

The LIRR’s 305 route miles that are fully operational with Positive Train Control technology include areas of switching complexes at Jamaica and at Harold Interlocking, which consists of a complex set of interlockings in Sunnyside, Queens, where the operator meets Amtrak’s Northeast Corridor tracks for the connection to Penn Station.

NJ Transit, which operates West of Hudson service under contract with Metro-North, is also operating in full PTC on the Pascack Valley and Port Jervis lines.