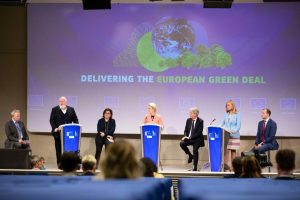 The European Commission adopted on July 14 a climate package of proposals to achieve a reduction of greenhouse gas emissions by at least 55% by 2030, compared to 1990 levels.

The proposals will fit the EU’s policies on climate, energy, land use, transport and taxation to meet the commitment to become the world’s first climate-neutral continent by 2050 and make the European Green Deal a reality.

With the proposals, the European Commission has presented the legislative tools to deliver on the targets agreed in the European Climate Law and fundamentally transform the economy and society for a fair, green and prosperous future.

The proposals combine the application of emissions trading to new sectors and a tightening of the existing EU Emissions Trading System (ETS), increased use of renewable energy, greater energy efficiency, a faster roll-out of low emission transport modes and the infrastructure and fuels to support them. They will also align the taxation policies with the European Green Deal objectives, include measures to prevent carbon leakage and provide tools to preserve and grow our natural carbon sinks.

“Our proposals will spur the necessary changes, enable all citizens to experience the benefits of climate action as soon as possible, and provide support to the most vulnerable households. Europe’s transition will be fair, green and competitive,” Executive Vice-President for the European Green Deal, Frans Timmermans said.

The Renewable Energy Directive will set an increased target to produce 40% of the EU’s energy from renewable sources by 2030. All Member States will contribute to this goal, and specific targets are proposed for renewable energy use in transport, heating and cooling, buildings and industry. To meet both climate and environmental goals, sustainability criteria for the use of bioenergy are strengthened and Member States must design any support schemes for bioenergy in a way that respects the cascading principle of uses for woody biomass. To reduce overall energy use, cut emissions and tackle energy poverty, the directive will set a more ambitious binding annual target for reducing energy use at EU level. As the road transport is responsible for almost 72% of total GHG emissions from transport, the EC proposed stronger emissions standards for cars and vans. By 2035, all the new registered cars will be zero-emission while a reliable charging and fuelling network will be in place.

On the transport sector, the climate package of proposals covers the maritime, aviation and road sectors, which the largest emitters of GHG emissions and must cut their emissions by 90% until 2050. The rail and waterborne transport are the lowest emitters and a modal shift towards sustainable transport is necessary, a transition also strengthened by the Sustainable and Smart Mobility Strategy unveiled in December 2020. The new transport plan relies on rail transport: by 2050 the rail freight traffic will double while the high-speed rail will double by 2030 and triple by 2050.

According to the new proposals, the aviation and maritime fuels cause significant pollution and require dedicated action to complement emissions trading. Thus, the Alternative Fuels Infrastructure Regulation requires that aircraft and ships have access to clean electricity supply in major ports and airports. The Regulation includes the rail transport sector which is already a leader providing sustainable solutions.

A new Carbon Border Adjustment Mechanism will put a carbon price on imports of a targeted selection of products to ensure that ambitious climate action in Europe does not lead to ‘carbon leakage’. This will ensure that European emission reductions contribute to a global emissions decline, instead of pushing carbon-intensive production outside Europe. It also aims to encourage industry outside the EU and our international partners to take steps in the same direction.

To help Member States to implement the new policies, a Social Climate Fund has been proposed for energy efficiency, new heating and cooling systems, and cleaner mobility projects. The fund would be financed by the EU budget, using an amount equivalent to 25% of the expected revenues of emissions trading for building and road transport fuels. It will provide EUR 72.2 billion of funding to MS, for the period 2025-2032, based on a targeted amendment to the multiannual financial framework. With a proposal to draw on matching Member State funding, the Fund would mobilise EUR 144.4 billion for a socially fair transition.

“The European Green Deal is our growth strategy that is moving towards a decarbonised economy. Europe was the first continent to declare to be climate neutral in 2050, and now we are the very first ones to put a concrete roadmap on the table,” President of the European Commission, Ursula von der Leyen, said.