Metrolinx has announced that more than 36 km of track have been laid for the Eglinton Crosstown LRT project, representing the completion of over 75 per cent of the whole project.

The construction teams have completed the installation of the tracks between Laird and Leaside stations, near Bayview Avenue and Eglinton Avenue. On the west side, major construction has been completed on Fairbank station, and the contractor is working on installing tracks as well as the power systems.

At Mount Pleasant station crews poured 950m3 of concrete at the beginning of February, marking the last of the concrete needed for the lowest level of the station, forming the base upon which the platform and concourse levels will be constructed. At Oakwood station, customised formwork designed specifically for the Crosstown project is being installed for the last pour in the station cavern. Once the pour is finished, all the concrete works within the cavern will be completed.

The 19 km – long light rail line will run underground for more than 10 kilometres, from Keele Street to Laird Avenue, then at surface to Kennedy station.

The Eglinton Crosstown LRT will cross Toronto on an east – west transport axis providing up to 60 per cent faster services than other transport modes. The new line will have 25 stops between Kennedy in the east and Mount Dennis in the west.

The new public transport connection will provide access to the existing services such as the TTC Line 1, the GO rail system, city’s bus network, servicing the Greater Toronto Area. 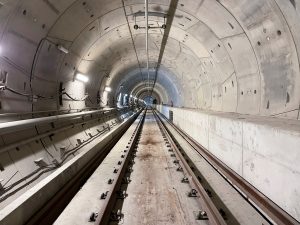 The project is part of a CAD 8.4 billion (USD 6.57 billion) investment programme. The Crosstown LRT is expected to be opened in 2022, when it will operate as Line 5 Eglinton.

The authorities have big plans for the development of Toronto’s transport system, with projects announced in 2019, focused on the modernisation and expansion of the transit network. According to the estimations, CAD 28.5 billion (USD 22.3 billion) is the total value of the investment for four projects.

In 2020, two Request for Proposals were issued for tunnelling work on two new transit projects in Toronto.