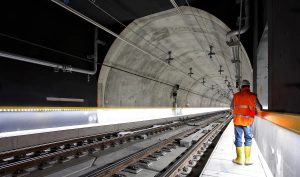 The U.S. President Donald Trump has issued a presidential border crossing permit to Alaska-Alberta Railway Corporation (A2ARail) for the construction of Alaska-Alberta railway line that will link the U.S. and Canada through the Alaska State and Alberta province in Western Canada.

“The issuance of a presidential permit is a significant milestone that will greatly assist with our continued efforts to build the A2A railway. This is a world-class infrastructure project that will generate thousands of jobs for American and Canadian workers, provide a new, more efficient route for trans-Pacific shipping and link Alaska to North American transport networks. The new rail line will provide for greater national, international, and global trade and create new and exciting economic development opportunities for a wide range of businesses, communities, and Indigenous Peoples in Canada and Alaska,” Sean McCoshen the Chairman of A2A said.

The Alaska-Alberta railway line will be an efficient transport link for the two states and will ensure the transport of bulk commodities including grain, ore, and other resources, in addition to containerised goods. It will also offer rail passenger transport services.

The project is estimated at USD 17 billion. To date, a USD 100 million investment was allotted for the pre-feasibility, feasibility, and detailed engineering for the project.

The construction works are expected to be completed in 2025 and the line would be fully operational in 2026, after all tests will be successfully completed.

According to the prospects, the new line will “unlock USD 60 billion in additional cumulative GDP through 2040 and create more than 28,000 jobs,” McCoshen said.