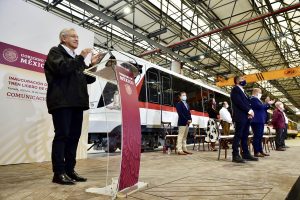 The President of Mexico, Andrés Manuel López Obrador, the Undersecretary of Transport, Carlos Morán Moguel, and the Secretary of Communications and Transport, Jorge Arganis Díaz Leal, have officially opened the Guadalajara LRT 3 on September 12. The 21.5 km-long light rail line is served by 18 stations, of which 13 elevated and five underground. The line crosses through two viaducts totalling 16.1 km and through a 5.35 km tunnel.

The new line connects the cities of Zapopan, Guadalajara and Tlaquepaque running from Arcos de Zapopan station, in the northwest to Central de Autobuses in Tlaquepaque. There are five stations in Zapopan, three in Tlaquepaque and ten in Guadalajara, of which Ávila Camacho and Guadalajara Centro stations provide the transport connection to the Line 1 and Line 2, respectively.

The project has a value of Pesos 32 billion (USD 1.5 billion), a historical investment in the State of Jalisco, funded by the Federal Government.

With the commissioning of Guadalajara LRT 3, the length of Jalisco’s urban electric train system increases by 86 percent, the number of stations by 60 percent and the number of trains in operation by 70 percent. 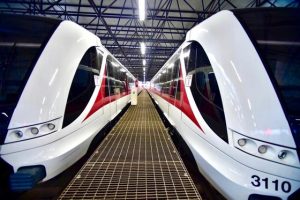 Alstom was selected by the federal Secretaría de Comunicaciones y Transportes to provide an integrated system for the Guadalajara network extension. The project, representing a nearly EUR 330 million investment, with EUR 240 million Alstom’s share. The contract included the supply of 18 Metropolis trains, communication systems, the high-voltage and traction substations, and traffic control systems based on Urbalis 400, Alstom’s CBTC system. The trains are equipped with air conditioning, video surveillance, and passenger information systems.

The trains provide a travel time of 33 minutes, with a frequency of 4.5 minutes.

The new light rail line offers transport connection to the Line 1 and 2 and will enhance mobility services for residents across the State of Jalisco, providing significant social and economic benefits.