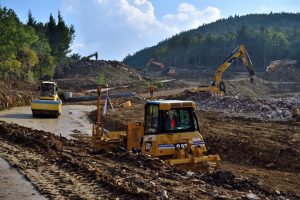 Under the contract, the consortium will build two bridges and a gallery in Glinščice Valley. The works are expected to begin in August and should be completed in November 2021.

These works are part of the project’s preparatory works and are 85% co-funded by the European funding. Under the 2014 CEF call, EUR 16.7 was the eligible cost of the works and studies, of which EUR 14.19 million are EU funds.

The Divača – Koper project envisages the construction of a 27 km second track, 75% consisting of eight tunnels. Two viaducts, two bridges and one gallery will be also constructed under the project.

The total value of the project was estimated at EUR 1.2 billion, of which EIB provided EUR 250 million, while EUR 109 million are covered by the CEF.

For the implementation of the project, 29 bids were submitted for the tender which was split into two lots.

2TDK, Slovenia’s state-owned company, has received 29 bids for the construction of Divača -Koper second track. The tender was divided into two lots.