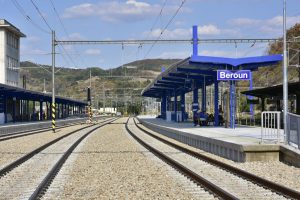 The Czech rail infrastructure manager SZ has announced preliminary market consultations for the Praha-Smíchov – Beroun rail design tender. The launch of this market consultation was also announced in the Official Journal of the European Union, via the TED (the Tenders Electronic Daily).

SZ will open the preliminary market consultation to all contractors who prove experience in the construction of bored tunnels longer than 500 metres in the field of transport construction and complete a registration form.

The project will be presented to potential contractors in the form of a video conference, the participants will be introduced to the intended design of the technical solution (documentation for the zoning decision is currently being prepared) and a moderated discussion will follow. At the end of the discussion, the participants will be asked to fill in questionnaires, which will be sent to them after the video conference. The responses in the questionnaires will then be evaluated by Správa železnic.

At the end of 2019, the Ministry of Transport has approved the feasibility study analysing a new route between Prague and Beroun with a recommendation for further preparation of the new line Praha-Smíchov/Braník Bridge – Beroun.

The variant which includes the new route in the whole length of the Praha-Smíchov – Beroun rail section with a branching for freight transport to the Malá Chuchle area and a connection to Braník Bridge within a railway freight line through the Prague junction was assessed as the most suitable one.

The new route is 26.3 km long, including the branch for freight transport,) while 24.8 km of the new route is situated in a single-track tube tunnel for each line track. The tunnel will start under Barrandov and end near Beroun, and the new corridor will continue with an overpass over the Berounka River valley. On the Prague side of the tunnel, a branch to the Branický bridge in the direction of Praha-Krč will be built, and on the Beroun side of the tunnel, a branch will be prepared for the adjoining new high-speed line in the direction of Hořovice/Plzeň.

In December 2020, SZ started the reconstruction of Beroun train station.