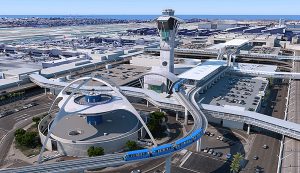 The Los Angeles County Metropolitan Transportation Authority (Metro) announced that Tutor Perini is the lowest bidder for the LAX Airport Metro Connector project for a USD 478 million contract to construct the a major transit station.

Six companies met the qualification criteria and were shortlisted:

The transit hub will connect the Metro Crenshaw / LAX and Green rail lines and a number of bus routes with the LAX Automated People Mover.

The LAX Airport Metro Connector project consists of the construction of a 3.6 km (2.25 miles) of an elevated line served by six stations, of which three inside the Central Terminal Area (CTA) and three outside. A new large capacity station as part of the Crenshaw/LAX Line and the C Line as well as an extensive Bus Plaza and terminal facility for Metro and municipal bus operators will be constructed as part of the project.

The transit station is envisioned to be the new transit gateway to LAX for transit riders that will be served by both the Crenshaw / LAX and Metro C Lines where passengers, visitors, airport employees and others will be able to transfer quickly and easily between the multi–modal transit at the transit station and the elevated APM.

The Los Angeles International Airport (LAX) broke ground on the APM project in March of 2019 and anticipates that the system will be operational in 2023.

During peak hours, the APM will run nine four-car trains, capable of carrying up to 50 passengers and their luggage, with a total of 200 passengers per train. For easy access, the APM trains will have large, wide doors and each car will have 12 seats designated for travelers in need. With an anticipated use of approximately 30 million passengers per year, it is estimated that the APM will result in 117,000 fewer vehicle miles traveled per day.