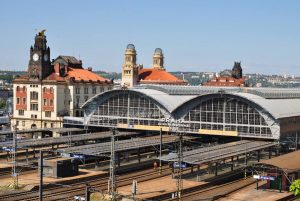 The Prague City Council has approved the launch of a competitive dialog on the Nový Hlavák project covering the revitalisation of the central station area concerning Vrchlický sady (Vrchlický Garden), the station’s check-in hall and the construction of a new tram line. The competitive plan and the project will be jointly implemented by the City of Prague, the rail infrastructure manager SZ, the Prague public transport authority DPP and the Institute of Planning and Development (IPR).

The purpose of the dialogue is to select the architectural design that best fulfills the complex task. The conditions of the Nový Hlavák competitive plan will be officially announced in the first half of June. Five multidisciplinary teams will be selected by an expert jury for their participation in the competition and elaboration of the proposal, based on the professional approach methodology. The winning design will be announced in June 2023 and the construction work is planned to start in 2025. The project is expected to be completed in 2027.

“For a long time, we have been trying to improve the quality of public space so that it is really for people. And the area around Central Station needs to be transformed due to its role as the gateway to the city,” Zdeněk Hřib the Mayor of Prague said.

The Nový Hlavák project envisages a new concept and transformation of Vrchlický sady, including the construction of a new tram line leading from Opletalova Street to the National Museum, and an extensive reconstruction of the check-in hall at Prague Main Railway Station. The aim of the project is to cultivate and renovate the entire area and create significantly better conditions for both residents and passengers.

“The Prague Central Station complex is undergoing gradual renovation and modernisation. The Railway Administration is aware that the largest railway station in the Czech Republic is part of the public space in the centre of the metropolis, which is why we have started preparing and now implementing projects that bring positive changes,” Jiří Svoboda, the General Manager of SZ said.

The tram section to be constructed also covers the construction of a stop at the train station ptoviding direct access to city’s public transport network. Currently the station check-in hall provides the direct connection to the metro system through the Line C and the nearest existing tram stop is situated 500m far from the station. “Thanks to the approval of the competitive dialogue, I hope that in the foreseeable future we will see the completion of the planned tram line through Vrchlického sady to the National Museum and Vinohrady, which will offer new and direct transport connections and thus increase the attractiveness of public transport and the main station,” Petr Witowski, the CEO of DPP said.