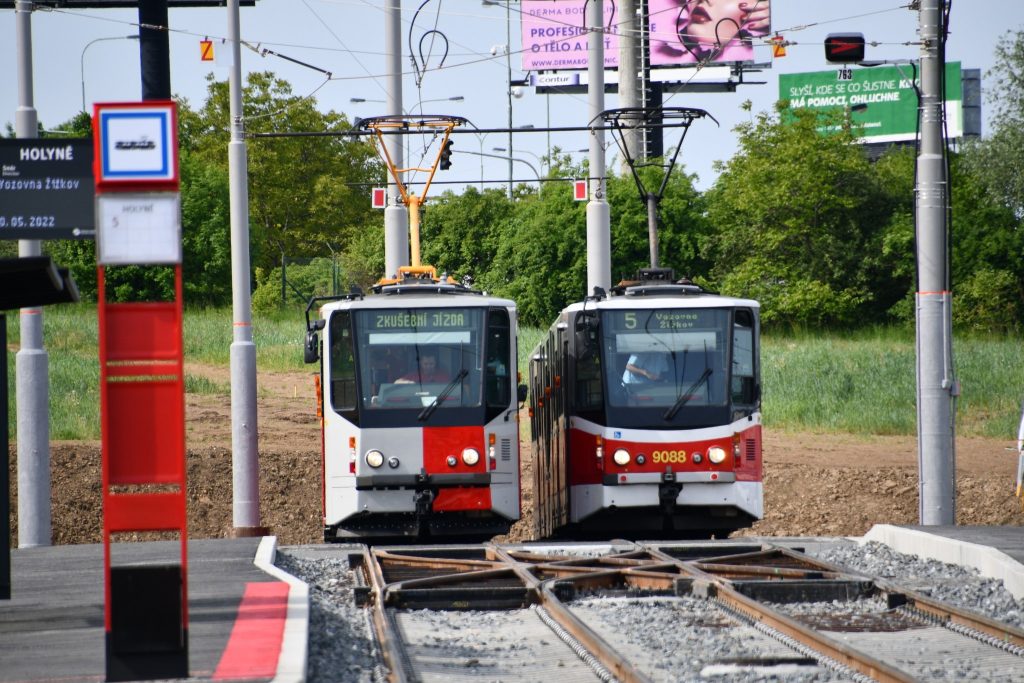 DPP received 10 bids for the construction of the new double track tram line which is expected to be completed in 8 months with works scheduled to start at the beginning of next year.

The line is the second and final section of the 4 km Sídliště Barrandov – Slivenec tram line which was entered passenger services in April 2022. The works for the new section include the construction of a 500-metres tram section which will end into a loop of 600 metres. On the section, there is one pair of Slivenec stops located directly in the roundabout. The new tram line will continue beyond the existing Holyně district towards the intersection of U Náhonu and K Barrandovu streets. Before the intersection, it will turn into an arc to U Náhonu street, which it will cross at an almost 90° angle, then it will continue in the direction along K Barrandovu street, and after about 250 meters it will end with a loop. The Slivenec interchange will have a capacity for up to 10 articulated trams with a length of min. 30 metres. It is also expected that in the area of the new line a park and ride facility will be constructed.

Strabag Rail still has to finalise the documentation for the implementation of the construction, its schedule, develop traffic engineering measures and ensure the issuance of related decisions.

“We would like to start building the final section Holyně – Slivenec tram line as soon as possible, however, we anticipate the start at the beginning of 2023 and in September 2023 we expect the completion of the works,” Petr Witowski, the CEO of DPP said.

The tram line will form the backbone of the public transport service in southwest Prague area. It will primarily serve the residents of Holyně and Sliven, but also residents of new residential district and visitors to the shopping center, the construction of which is being prepared in this area.

“The Prague tram expansion is at full swing. A new urban district for 8,000 people will grow around the new line which will provide citizens access to fast transport services to the city centre. Building new city districts and transport infrastructure at the same time is the only correct approach to city development,” Adam Scheinherr, the Deputy Mayor responsible for transport said.

Prague is currently investing in the modernisation and expansion of the public transport system relying on urban rail network. City’s tram development strategy includes four extension projects including the construction of a 2.3 km section and five stops between Divoká Šárka and Dědinská which is implemented by Subterra under a EUR 33.5 million contract. In September, DPP announced the tender for the construction of a tram line in the upper part of Wenceslas Square, which was closed four decades ago. The contract is estimated at CZK 1.25 billion (EUR 51.3 million) which works expected to take four years. currently, there is only one tram line crossing the city centre which is daily operated by 169 trams causing bottlenecks. The project covers the construction of a 600-meter-long double-track tram line, the transformation of the adjacent areas and the surrounding roads and pedestrian zone, the repairs of the Museum metro station which is an interchange station between Lines A and C, and the construction of a green area where trees will be planted.

In April, the city’s authorities have launched the construction works for the fully automated metro Line D. The 3 km metro section from Pankrác to Olbrachtova is constructed under a EUR 563 millio contract signed in 2021.

The Line D will be 10.6 km long with 10 stations from Náměstí Míru to the Písnice Depot. EUR 4 billion is the total estimated value of the project which will provide connections to the Line A (through Náměstí Míru station) and Line C (through Pankrác station) and will continue its direction towards the southern area to the Písnice town situated in the municipal district of Prague 12.