António Costa, the Prime Minister of Portugal, has inaugurated the electrified Viana do Castelo – Valença rail section on the Minho line which is now fully electrified “marking the beginning of electrified rail transport from the ports of Porto to Vigo with work in progress to improve the communication, security and signalling systems,” Costa said.

With the electrification of the last section of the line, the electric locomotives are able to run from the northern towards the southern part of Portugal, linking Valença and Faro.

Due to the electrification of the line, Comboios de Portugal runs its trains from Viana do Castelo and Valença in Northern Portugal. The electrified line allows a travel time reduction of 15 minutes and passengers benefit increased comfort provided by modern rolling stock. For rail freight transport the modernised Minho line increased the train frequency and doubles the traffic. Through the rail projects, Portugal tripled the capacity on freight transport, which is crucial to strengthen the competitiveness of North of Portugal and Galicia region.

The electrified line “connects the port of Vigo to the port of Viana do Castelo, now benefiting from a direct road access, and to the port of Leixões. We have managed to have on this Atlantic corridor, a port infrastructure served by a railway connection, which completely changes the picture of the economic relationship on both sides of the border,” Costa said at the ceremony. 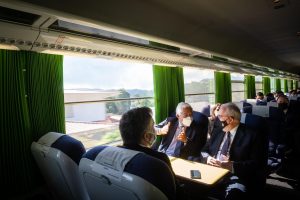 EUR 86 million was the total value of the investment for the modernisation of Minho line, of which EUR 68 million was covered through the Compete 2020 programme. EUR 16 million was provided for the electrification of Nine-Viana do Castelo rail section, which was completed in 2019, and EUR 18 million was the financing allotted for the electrification of Viana do Castelo-Valença section. For the modernisation of the Nine-Valença (Spanish Border) section, EUR 67.86 million was provided by the EU through the Cohesion Fund under the Competitiveness and Internationalisation” Operational Programme.