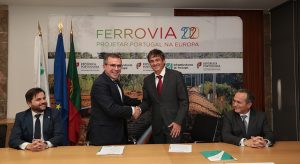 Infraestruturas de Portugal awarded a EUR 46.6 million contract for the construction of a 20.5 km line extension between Évora Norte and Freixo, as part of the future South International Corridor to Spain.

Comsa consortium, Fergrupo and Constructora San Jose won the contract and will have to deliver the project within 540 days (one year and a half). The project involves the construction of 13 passages, of which 8 overpasses and 3 underpasses, six railway bridges, of which the Palheta bridge will be the longest (575m).

Although the extension is a single line, it will be constructed to allow a future second track on the route.

The project is supported by the EU through the Connecting Europe Facility which will cover 40% of the total cost.

The project will reinforce the rail connection with the port of Sines as the gateway to Europe, in order to increase its attractiveness, especially in the Iberian Peninsula, creating new links to other connections with the ports of Lisbon and Setúbal.